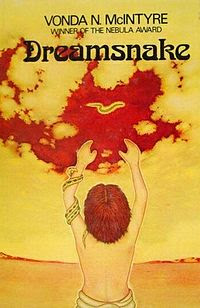 Why nuclear war killed off most of the planet and left the landscape with poisonous pockmarks, no one knows.  It has been too long and anyone who would have known, was killed off anyway.  But life has gone on in a kind of worldwide Wild West.

Despite the destruction and relative dark ages, a society of healers have developed, utilizing advanced (even now) medical and scientific techniques and an alien breed of snakes they call “dreamsnakes”.  In combination with the dreamsnakes, healers use their intimate knowledge of biology and a method of transforming the poison of snakes like cobras and rattlers into powerful drugs capable of healing even tumors.  Our story begins when the healer “Snake,” named for her uncanny abilities, in attempting to help a clan living on the outskirts of civilization neglects her patient and her dreamsnake is killed, severely impacting her ability to heal and her membership the society of healers.

The power of mystery
If last week’s review of Gateway introduced me to the power of unresolved mystery in SF, Dreamsnake perfected the craft.  How much is known about the alien plants and animals that have found their way to Earth?  Who are the off-worlders?  After society’s near-complete destruction, how did the healers learn such advanced medical techniques?  There are just about as many questions as there are answers in Ds.  As unsatisfying as that can be when McIntyre’s world is so ripe for exploration, it is also what makes the damn place so intriguing.

Once Snake’s medicine and her extraordinary abilities were revealed (early in the book), I anticipated learning more about healers and their snakes.  When that didn’t happen I was at first upset and skeptical.  Then, as realized how terrifying it would be to need the healers for even mundane treatment and not have the slightest understanding how they did what they did nor the experience with snakes to stay calm, I truly understood the power of being left in the dark.  Which is to say, I also creeped the hell out.  I’m not scared of snakes in general.  I’ve been around some snakes (constrictors) but I’m sure if I came across a poisonous one in the wild my response would be…unbecoming of an adult male.  The point though is that, stories or video of snakes has never bothered me…until Dreamsnake.  I think that deserves a tip of the hat, no?

A word about the audiobook
Normally, I would want to say more about the text itself but one of the things that made Ds great in my experience was the reader.  Ds was what you might call a fast-paced slow book – 0ne in which the action is gripping and the tension oozes from the pages (in this case, from my speakers).  Nothing of that tension was lost in Anna Fields interpretation.   I thought her tone and pace complemented the text in the way Clint Eastwood defined the role of the lone vigilante in the American West (“The Man With No Name” from A Fistful of Dollars was one of my all-time favorite characters ever).  This is to say that every healer/wanderer in every post nuclear-apocalyptic world is going to be compared to Anna Fields’ reading of Snake.  She is the new standard.

Anna Fields’ child’s voice, the voice of Melissa, was the best kid’s voice I’ve heard in an audiobook.  Hands down.  Other than that, she isn’t one of those readers that can do completely different voices for each character (at least she didn’t for Ds), but she did change her inflection or pitch enough to be satisfying and it complimented the tone of the book in a way that.  Her eerie reading combined with Snake’s unnerving brand of medicine and the ghastly pain of a radiation poisoning victim was enough to literally make me stop listening on two separate occasions.  I love gore and all manner of schlock so that this happened at all was kind of a world changer for me.  Oof.

Recommendation
Was this book perfect?  Certainly not.  I thought Ds began a lot stronger than it ended.  For instance, the moment between Snake and Arevin when they just sat with each other was just amazing and electrifying for the unspoken something that passed.  I was convinced that Arevin’s attempt to find Snake and then ill-conceived and unsuccessful attempts to save her from apparent danger were maybe an allegory for the changing role of women in society and that Arevin may turn out completely inept or never find her.  Of course this was exciting me to no end the whole time, but I was pretty disappointed when it turned out otherwise.

With that being said, did Ds include everything that I love about SF?  Absolutely!  Did I enjoy every second of this book?  No question about it!

The roll of the die...
This week’s book is Ringworld by Larry Niven.

Next week’s book is Where Late the Sweet Birds Sang by Kate Wilhelm.  After such a great experience with Dreamsnake, I might go for another audiobook here.

In other news...We moved this week and our internet hasn't been set up yet because apparently Comcast needs to invent a new internet before they can install it.  Posts will be light this week but lots of cool stuff will be coming soon...
Posted by Unknown