A few centuries from now, espers (Peepers, telepaths) have integrated into every level of society, making premeditated murder a thing of the past.  How could someone harbor that kind of hatred when someone is liable to read your thoughts at any second?  Enter Ben Reich, immensely wealthy and immensely disturbed but a “normal”.  Reich plans to murder his business rival and take over his company and the galaxy, destroying the Esper Guild in the process.

Police Prefect Lincoln Powell is an esper and an insanely smart and adroit detective.  Very early in his investigation he realizes that Reich is the criminal he’s after and sets about finding enough evidence for a conviction and sentence of “demolition”.

Sure, Freudian themes are all over the place in this book, and while that likely will float a lot of boats, I was drawn to the eugenics program devised by the Esper Guild.  This is also what made want to see Reich succeed, despite the fact that I was clearly supposed to hate him.  In this world, Espers are seen as the pinnacle of human ability and the Esper Guild only allows espers to marry other espers in order to cultivate their unique skills.  Moreover, even a world in which humanity has evolved to have integrated telepaths into every level of society and nearly transcended violence, it is a computer (Old Man Mose – good computer name right?) that must administer justice and “normals” are treated as nearly second-class citizens by the Espers.  To me there is something deeply unsettling about what this society had to give up for their peace.

Reich’s crime though is an opportunity for “normals.”  If Reich gets away with murder, and a normal is able to circumvent the infallible esper safety net, then a huge hole will have been punched in the fabric of this unfair system.  The fact that Reich’s crime will likely make him the most powerful human in the galaxy would also mean an elevation of normal status.  If Reich were unsuccessful and the good guys won, it could very possibly mean something dreadful for humanity and the title “The Demolished Man” takes on a wholly new meaning.

Indeed there were so many deeply layered themes in this book that I would think it would have had wider appeal over the years.

Melodrama
Most of the time, when you hear about melodrama it’s always in reference to theater or film but if there ever was a book exhibiting the same themes, it was The Demolished Man.  When the book starts Ben Reich is clearly a monster, an insane, sad and absolute Mad Man.  And not in a cool way.  He is just sick and out of control and on the loose!  As he is planning and committing D’Courtney’s murder, one cannot help but root for his failure.  And yet, he is a truly captivating individual.  It’s like watching a car wreck, you just can’t look away.

Powell is a 1st class esper and as such can delve into the deepest corners of the subconscious.  He is an equally unstoppable force and the collision of these two gigantic personalities is really something to behold.  He is an exceptionally skilled and exceptionally passionate police prefect and whenever Reich seems to (always) stay one step ahead, Powell is under tremendous pressure to devise some new scheme to trap Reich.

After the crime is committed, once Reich and Powell are desperately trying to locate the only witness, I found myself enjoying the competition so much that I literally could not take my eyes off the page (“Where is that damn girl!”). But this owes as much to the outrageous personalities of the two central figures as it does to the unique character of Bester’s prose.

A Graphic Novel
The narrative in The Demolished Man is primarily driven by Alfred Bester’s dialog, the pace and strength of which is both propelled to a fever pitch and readable by his superb use of space and symbols. 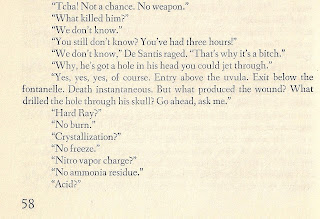 When espers stick to telepathic messages, they can communicate at lightning speed (I really like this idea and it reminded me of BrainPal communication from Old Man’s War by John Scalzi).  If an esper conversation is at first disorienting, it is also immediately natural and his use of visual stimuli makes perfect sense in light of the fact that espers prefer to communicate by telepathic messages and symbols.  I even questioned if Bester had taken this far enough.  Why would espers limit themselves to sending images of text?  In the end, I was happy to realize that with each conversation between a new pair of espers, or in new circumstances, the method of conversation would change.  This seemed completely logical to me so I was okay with allowing myself to believe espers did things this way.

However, if at first an esper conversation is disorienting though, an esper party is nearly incomprehensible.  Conversations become word art and combine with other conversations to create a web of thought patterns that is at once cool and psychosis inducing.  The espers then play a game in which phrases and conversations take on multiple meanings; the literal meaning of the words, and also the meaning of the pictures those words create in the minds of the other espers.  I believed it and liked it.  A lot.

Throughout the book, visual embellishments of names and phrases like @tkins, ¼Maine, Blessings and some others enhance the frenetic pace of the dialog, in my opinion.   I found it an extraordinary tool for creating the experience of telepathic communication and throwing the reader into the mad dash that never ends.  Though I was caught off-guard at first, once I realized you could read it like a txt message, it made complete sense and just felt right.  If espers can communicate as fast as thought, why would they communicate with pictures as often as words?  I actually started wondering if Bester had really gone far enough with it, considering how much communication has changed as a result of txts which are still much slower than the speed espers could communicate.

Recommendation
The quality of this book is evident by the fact that not only have the themes but also Bester’s unique style have remained relevant after almost 60 years.  I think his fast pace owes to the fact that pop culture was really exploding at the time and is also what keeps this book relevant today.   Being part science fiction, part detective/psychological thriller, this book also probably has appeal outside the genre, which is a dimension that few of the other Hugo Winners from the 1905’s can also claim.  People, this is a good one.

This Week’s book is Fahrenheit 451 by Ray Bradbury.  This one is short so I anticipate getting some bonus reading in too!

Next Week’s Book is Farmer in the Sky by Robert Heinlein.  This is the second book by Heinlein in the 1950’s and I can’t wait to see which is the master of the precious.
Posted by Unknown