Waffles and A Plan

This morning, my wife and daughter woke me up with a waffle breakfast today, so I finally got my waffles (you can breathe again).  I also woke up to continued poor lung health, so it looks like I'm entering my third week of being sick.  Luckily I picked up some extra reading materials from the library this weekend so I'm set.  I got some non-sci-fi titles that I've been meaning to read for a while, but I was really excited about Red Mars. 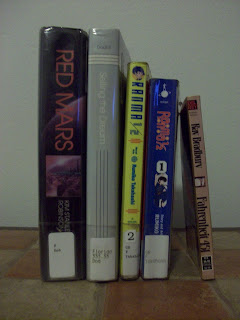 After reading Foundation and Empire (for The Mule in week 1), I was really disappointed because so many people seem to love the series but I was completely underwhelmed.  I have decided that I may have liked the book more had I read the first book in the series and since I will likely have some extra time this week, I thought I would try to do some prep-work for the same situation a couple decades from now. Red Mars is the first book in the Mars Trilogy by Kim Stanley Robinson and never one the Hugo Award but books II and III did, in the 90's.  I love stories about Mars (probably just residual enthusiasm from A Princess of Mars by Edward Rice Burroughs), so I wanted to make sure this series gets a fair shake.


So, we're entering the 2nd month of the Hugo Endurance Project with some extra reading and a deficiency of marathon training.


I also plan to make a few additions to the grading process in anticipation of finishing the first decade and to beef up the rest of the pages that still need work.


Hope you enjoyed the last 4 weeks!
Posted by Unknown