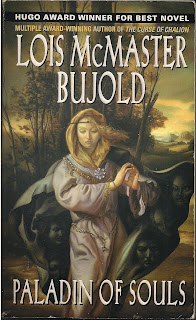 Stats
Paladin of Souls by Lois McMaster Bujold
2004 Hugo Award Winner
Got it from: Own it (found it in the $1 bin at the library)
470 pages

Dowager Royina Ista, previously cursed and so profoundly grief-stricken as to be marked as mad, sets out on a religious pilgrimage, intending to right herself in the world once again.  A different kind of madness ensues.

Bujold does what Bujold does best
The most compelling aspect of Paladin of Souls is the part of science fiction and fantasy that Bujold does so well.  Ista is a wonderfully conflicted, funny, and smart female protagonist who struggles to know her gods and the people around her in a way that is at once completely foreign and weirdly unsettling, yet also totes-compelling, human, and eerily familiar.

The differences between life on Bujold’s Ibran Peninsula and modern life abound, but are overshadowed by a very intimate and very warm human story.  Maybe Bujold’s worlds aren’t as confoundingly different from our own as a Ringworld for example, but Bujold brings her readers there in a very different way.  Rather than devising spectacular tech or weird aliens Bujold pulls readers into her worlds by the emotions.  To be fair there is some pretty rad stuff thrown in there too…Chalion is a place where:


Knowing what we know about Bujold’s skillz in her other Hugo winners (there's a Bujold Skillz meme in here somewhere...), and considering even just a short list like that, are you prepared to say you don’t want to read this book?

I really want to love this…
As I do best, I have jumped into the middle of a Lois McMaster Bujold series.  And as has been the case in the past, it doesn’t seem to matter much.  I’d say as far as my enjoyment of the Hugo’s goes, I’d lump this in with any of Bujold’s other winners.  Which is to say that it was a pretty damn decent book and I liked a lot about it, but it also wouldn’t be the first book I recommend to someone wanting to break into the Hugos.  Maybe reading them out of order has caused some problems again, but I don’t think so.  Paladin of Souls is good as a stand-alone novel.

Paladin of Souls is one of just few of what I have come to think of as the Spiritual Hugos in which dealings with a divine being or matters dealing with spiritual practices take precedence over other more traditional SF & F elements.  I have tended to like these books, but not really love them and that’s pretty much what’s happened once again.  Everything about Paladin of Souls appeals to me on a conceptual level and I really want to love every page, but it doesn’t ever elevate itself beyond just the sum of its parts.

Recommendation
If you were a fan of Barrayar, this would be another great read.  In fact, Ista was to me a character very much akin to Cordelia Naismith.  If you thought Cordelia was maybe a little too ultra-confident sometimes, you won’t see that in Ista.  However, while she seemed a little more rounded out as a character, she’s still been lumped the same exact space of my brain (my brain is just a tiny chest of drawers) and so have the two books.  To be clear it’s a good space, but it’s also the same space as her other books.

There is also a lot of horseback excitement.  Which is to say that from a strictly level-of-horseback-excitement view, I guess Paladin of Souls is your clear winner.

My last post was October.  That is really bad.  As you know I’m all caught up on the Hugos, but I’m still reviewing the last 10 or so.  I’ll be trying to pick up the pace again.  Also, I’m trying to finish the first Mouse Guard by David Peterson (a graphic novel) by the end of the year because my reading list for 2013 is pretty embarrassing and I need to spice it up at the last minute.  Because that will change everything.
Posted by Unknown