As you know, the 1980’s are over.  I’ve actually been done with them for a few weeks now and I’m quite a ways into the 90’s already but my reviews are stacking up faster than I can make time for them.  I’m hoping to crank out a few more this week, but in the meantime, let’s bring the 1980’s in for a landing. 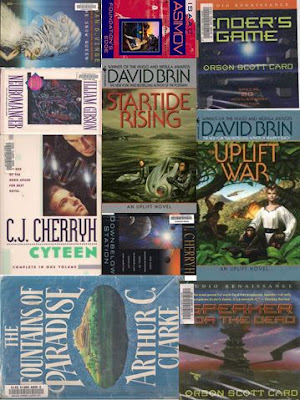 I think my top two covers are:

Highest HEP Score: With a perfect score of 25, this one goes to Cyteen by C.J. Cherryh which also qualifies for the Longest Book Of The Decade at 680-pages.

Lowest HEP Score: The low score is surprisingly high.  Downbelow Station also by C.J. Cherryh, had the lowest score of 18 and that was even a forgiving score because I didn’t feel I gave it a fair shake due to time.  I’m very interested by the fact that Cherryh had both of these titles and I’m anxious to read another of her books to see if it is as wildly unpredictable as these two were.

In fact, before I go any further, how but our favorite graphic: 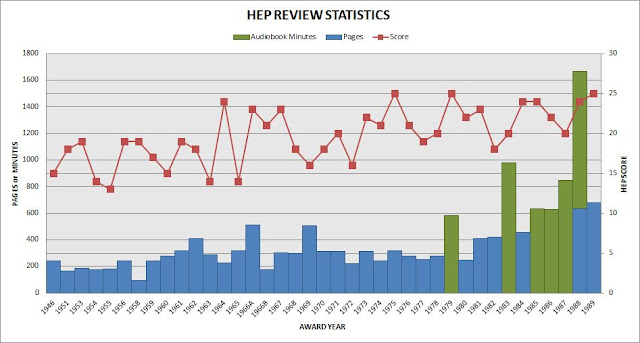 The average HEP Score was up to 22.20 from 20.70 in the 80’s.  I think it’s safe to say that the further this challenge progresses, the more fun I’ve been having.  For some reason I’m still waiting for a bomb, but for the most part, the 80’s were a really great decade.  More on the stats later.

Biggest Surprise/Disappointment: I should have cared a lot about Necromancer by William Gibson, but the audiobook I listened to was terrible and completely ruined my experience.  Massive disappointment.

Mom Pick: Ender’s Game by Orson Scott Card.  I don’t know, she probably wouldn’t be very likely to read this and might not actually enjoy it but I ended up here basically through the process of elimination.  My mom told me a couple weeks back that she doesn’t care about SF (I know, I started to wonder if I was adopted) and I immediately thought this would be a cool category for my Decade in Review post.  I’m not sure it worked as well as I had hoped for this decade but hopefully it will work better next time.

Favorite Character: Ariane Emory from Cyteen by C.J. Cherryh.  This is referring to Ariane 2.  Clone Ariane.  I enjoyed her turmoil and her outlook and how conflicted she always felt.  Runner-up went to Fiben Bolger, the Neo-Chimpanzee from The Uplift War by David Brin.

Favorite Gadget:  I think I’m gonna say the space elevator from The Fountains of Paradise by Arthur C. Clarke.  I liked the scale of the thing (on par with the catapult from The Moon is a Harsh Mistress), and I enjoyed the detailed experience of the entire fraught stop-and-go building process.  Runner-up goes to the battle room from Ender’s Game by Orson Scott Card.  I still want one.

Favorite Featured Epic Quote: As with quotes posted from the 70’s, these were slim in the 80’s.  Startide Rising by David Brin wins handily for alien hijinks.  I’m really kicking myself for not posting some from The Uplift War by David Brin, though I did include some in the review itself.

Favorite Moment:  When Fiben when medieval on the fence in The Uplift War by David Brin, I was freaking out myself.  Literally in awe.  I loved it a lot.

Coolest Aliens: I love even the slightest mention of alien species but they were few and far between in the 80’s.  I’m gonna go with “Silky” from The Snow Queen by Joan D. Vinge.

Favorite Review:  I really enjoyed writing the review for The Uplift War by David Brin.  If I had to do it over again, I’d want to do it without attacking Brin for a statement he made in the epilogue of the book, but I still had fun.

Back to the stats.

Throughout the 80’s, I wrote a bit over 10,000 words in the 10 reviews from this decade with my longest being Downbelow Station followed by The Uplift War.

You probably noticed that I listened to quite a few audiobooks this go round.  If you didn’t, you missed it.  I’ve changed my chart a bit to reflect page totals or audiobook minutes of each book.  This shift was mostly thanks to Cyteen.  I took way too long on that book.

Overall, the books totaled 2,854-pages and because I only read 6 books, the average was 476-pages each book.  In fact, there was only one book under 400-pages.  Maybe some of those books I listened too would have brought the average down, but still, that’s quite a jump from the average of 281-pages in the 70’s!

My last chart hasn’t changed much.  My library was all over the 1980’s Hugo Award winners and I didn’t need to go anywhere else.  Nice! 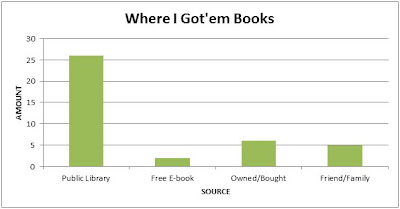 As I said, I’ve already started the 1990’s.  I’m something like 4 books into the decade and it has been one whopper after another.  Can the scores get much better than they were in the 80’s though?
Posted by Unknown

Email ThisBlogThis!Share to TwitterShare to FacebookShare to Pinterest
Labels: Geeking Out, Retrospects