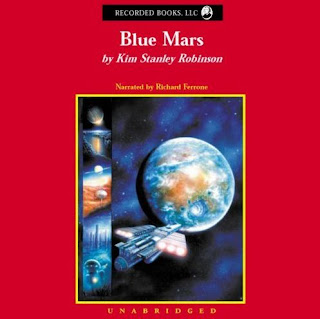 History’s Epilogue
As one begins the Mars Trilogy, one is struck by size of the solar system, Kim Stanley Robinson’s imaginative muscle, and the sheer and utter coolness of the planet Mars.  Very quickly one realizes that while KSR may have given us some of the most complex and memorable characters in all of SF, and while Mars may be the character, in fact the Mars Trilogy is the story of the evolution of humanity.  I know… Sax would try to tell me “it’s just phenotypes,” but I’m telling you, in these books…Mars is really just a tool.  Mars.  Doesn’t.  Matter.

Don’t kill me yet, hear me out.

I realize this is probably one of the top 5 most sacrilegious SF statements I could ever make, and if each Red, Green and Blue Mars were taken as stand-alone novels, I’d not say the same thing, but Blue Mars makes it clear that KSR always intended that (while Mars is a super-ultra-cool part of the books) Mars would play a supplementary role.  In Blue Mars, we begin to see that the relatively tiny carrying capacity of Mars will limit its ability to remain relevant in the ongoing political turmoil on Earth, but you see…Mars was also never meant to be the destination.  In Blue Mars we’ve gone beyond those Martians who no longer care about Earth; now Uranians have stopped caring about Mars.

In Blue Mars we’ve also witnessed the near complete triumph of human technology over billions of years of Martian history, over the entire notion of the “natural world”, and of human evolution.

Gene therapy can have you purring like a cat if you want.  Literally.

And that’s how we knew that Sax was wrong, it wasn’t just phenotypes.  In Blue Mars…humans are undeniably different, and genetic differences are just the beginning.

In the late-80’s to early 90’s, around the time of the end of the Cold War, Francis Fukuyama (and the rest of academia – whether they agreed or not) started talking about “The End of History”.  “History” hadn’t stopped, but he argued the realm of socio-political progress had reached its conclusion.  The Western Ideals of Capitalism and Democracy, while not yet perfect, represented the final frontier of political philosophy.  The Socialist Vision and Communism had been physically, philosophically, fundamentally overcome.  Though not without its detractors, The End of History became a popular idea that influenced both right and left thinkers.  I haven’t read it in some time but I remember the essay being at once philosophically stimulating and horrifying.  Not entirely unlike any of the Mars Trilogy in fact.

At this same time, as the academic world was caught in the whirlwind of History’s End and debates about socialism’s ability to continue to exist as a political/philosophical possibility, Kim Stanley Robinson won 2 Hugo Awards, 1 Nebula Award, 3 Locus SF Awards, 1 BFSA Award, and countless nominations with a trilogy built on the very idea that the socialist vision has not only survived the cold war, but represents the inevitable result of humanity’s expansion to the rest of the solar system, that patriarchy is a serious impediment to democracy, and that the entire democratic process has been hijacked by privatization.

If one never makes it to the conclusion of this trilogy, Red and Green Mars may very well seem to exist entirely within Fukayama’s worldview, where Western democracy and capitalism seem to be, if clearly flawed, so ingrained and insurmountable that even striking out to colonize Mars won’t break us free of their grasp.  And while KSR does begin to dismantle this idea in Green Mars, it isn’t until Blue Mars, the dissolution of patriarchy and the money economy, and the “accelerando” that it becomes absolutely clear his vision of what I suppose in light of Fukuyama’s essay, one might call, “history’s epilogue”.

Just about everyone talks about how immersive and lived-in and realistic these books are.  The perceived realness of this trilogy is always front and center in any online discussion and in light of the fact that KSR does not tread lightly when he comes to the socio-politico-philosophical debates -- one cannot enjoy these books without enjoying these debates -- I have to believe this is an indication that the SF community still recognizes a valuable dialogue taking place and believes the dialectic has not in fact reached its inevitable conclusion.

But there IS still Mars…
Well, obviously Mars still matters…I won’t completely rule it out.  Mars is still the revolutionary hot plate.  Mars and Martians, are still developing.  And the sunsets so are beautiful.

The same kind of thing continues.  This time, Ann’s character was absorbing in that transformative way that approaches Sax’s metamorphosis in Green Mars.  But in Blue Mars, and throughout the trilogy, characters like Ann Clayborne, Arkady Bogdanov, John Boone, Nadia of the Nine Fingers, Hiroko Ai, Sax Russell are convincing and memorable enough to take home the Hugo.  And though I downplay it here, Robinson’s treatment of Mars deserves its own Hugo award.  Every.  Time.

Recommendation
Blue Mars is the piece of the trilogy for which I feel least enthusiasm.  Obviously, if you haven’t read Red or Green Mars, you should not read this book.  While I may have been biased, I thought that Green Mars deserved the Hugo in its own right.  I’m not sure I can say the same about Blue Mars, though the weightiness of the political outcomes and the continued growth of some seriously deep rooted characters makes hard not to.  All that being said, Blue Mars was as immersive and mind-numbing as any other SF in existence.

This week I'm working on The Diamond Age by Neal Stephenson, my very last Hugo from the 1990's!
Posted by Unknown