The Lies of Locke Lamora Read Along Week 3 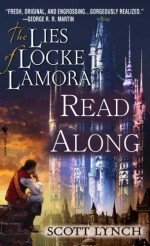 The Lynchmob is entering our 3rd week of shenanigans and something tells me reading the rest of the mob's answers is going to be nearly as fun as this week's reading if that's possible.

This week's reading has been such non-stop insanity that I don't really know how to explain it adequately.  I hope some of you not participating in the Read Along will pick this book up some day because it is too good to miss out on.  I really owe a debt of gratitude to LittleRedReviewer and all the other organizers who convinced me to join in.  This book rules me.

This weeks questions come from Bryce @ MyAwfulReviews and they are pretty goods.  I guess this week has been a lot of fun all the way around.

1. This section is where we finally get to sneak a peek at the magic in The Gentleman Bastards books. From what we read, what are your initial impressions of the magic Lynch is using? Is there any way that Locke and Company would be able to get around the Bondsmage's powers?

Real talk – I like the alchemy better.  The magic isn’t bad, but the alchemy is so cool and we have really only seen a hint at the magic, so I’ll hold-out a little longer before making a final decision.  I’m not sure how the GB’s will get past that magic but something must happen to get them out of this and the last interlude really shot down any thoughts I had about this, so now I’m kind of at a loss.

2. Not a question, but an area for rampant speculation: If you want to take a stab at who you think the Grey King might be, feel free to do it here.

I’m so glad this question was asked because my 2 best guesses are that it is Father Chains (assuming he faked his own death) or Locke’s itinerant father.  I’m leaning toward Father Chains because he has said so many times now that he has big plans for the Gentleman Bastards and The Grey King knew about their hideout.  The TERRIBLE treatment Locke has to go through makes me doubt myself, but that’s my answer.  I thought it could also be his actual father because he was mentioned shortly before Locke vaguely recognized TGK.  I really want it to be Father Chains.  Since this isn’t a question though, it doesn’t count if I’m wrong.

2.5 (since 2 wasn't really a question) Anyone see the Nazca thing coming? Anyone? Do you think there are more crazy turns like this in store for the book? Would you like to speculate about them here? (yes, yes you would)

Yes, yes I would.  First though, I didn’t expect Nazca and I cursed out loud, alone, in the car when it happened.  I was shocked FOR REALZ.  Second, I kind of thought the whole scene with the guy climbing out the window was a pretty crazy turn since that could be their alibi shot.  Other crazy turns?  I think Bug is kind of set up to do something pretty cool.  Also, if I had to guess which of the GB’s could ever possibly die, I’d say Jean since he is like Locke’s closest friend.  Man, that’s a lot of speculation in just two answers.

3. When Locke says "Nice bird, arsehole," I lose it. EVERY TIME. And not just because I have the UK version of the book and the word arsehole is funnier than asshole. Have there been any other places in the books so far where you found yourself laughing out loud, or giggling like a crazy person on the subway?

This week’s reading had me laughing like a crazy hysterical person the whole time.  My favorites were: “You’ll be using your balls for tonsils” and “We’ll give you our preferences when you suck the peas from our shit and eat them for dinner for a week”  Those might not be completely accurate but the point is that this book is changing my understanding of what really counts as an insult.  I’m not sure I’ve ever really been insulting in my life compared to the GB’s

4. By the end of this reading section, have your opinions changed about how clever the Bastards are? Do you still feel like they're "cleverer than all the rest?" Or have they been decidedly outplayed by the Grey King and his Bondsmage?

They are the best and they are my friends.  How dare you suggest that anyone would doubt the Gentleman Bastards!

5. I imagine that you've probably read ahead, since this was a huge cliffhanger of an ending for the "present" storyline, but I'll ask this anyway: Where do you see the story going from here, now that the Grey King is thought to be dead?

I actually did not read ahead because I wanted to torture myself.  I was pretty mad when I realized we were stopping at this point.  See my answer to Q2 for where I think it is going.  I think the Gentleman Bastards are going to be running shit by the time we’re through.

6. What do you think of the characters Scott Lynch has given us so far? Are they believable? Real? Fleshed out? If not, what are they lacking?

My only real complaint is Bug.  I don’t think we know enough about him, but I kind of suspect we might find out more in an upcoming interlude…hopefully.  Everyone else is the best.  Not only are the characters dynamic and fun but the dialogue, while over-the-top, feels so natural to me.  Plus I love the way Lynch reveals just the right details about the characters in the interludes.

7. Now that you've seen how clever Chains is about his "apprenticeships," why do you think he's doing all of this? Does he have an endgame in sight? Is there a goal he wants them to achieve, or is it something more emotional like revenge?

Again see Q2 for Chains’ endgame.  I think Lynch has eluded over and over that there is some overarching evil plan.  In the highly unlikely chance that I am wrong about Father Chains, maybe he planned this whole thing (the Grey King thing) out with one of his “associates” that he sent the boys to?
Posted by Unknown

Email ThisBlogThis!Share to TwitterShare to FacebookShare to Pinterest
Labels: LoLL Read Along